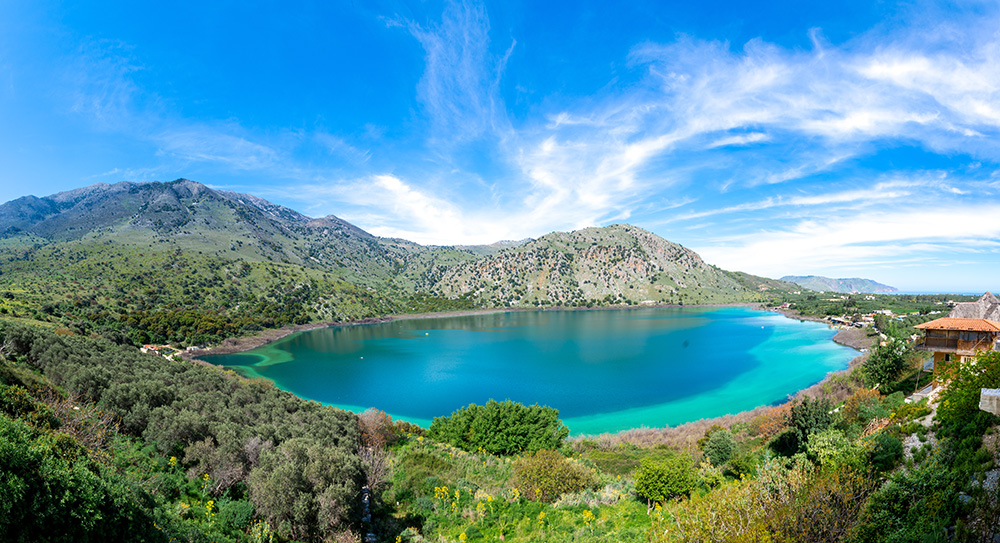 Lake Kournas is Crete island’s only natural freshwater lake. It gathers its waters from the Amati spring, which originates in the White Mountains (Lefka Ori) and underground springs. Once called Koresia after the ancient city Korion, the lake counts among the most popular tourist destinations in the Chania regional unit, favored by locals and foreign visitors alike. It is a summer draw even for those unfamiliar with the area. Save for the heavy winter rainfall, Cretans tend to explore Lake Kournas’s surroundings every season.

Up in the hills but not far enough to obstruct blissful sea views, the road leading to Lake Kournas offers a rewarding journey. The lake itself covers less than 60 hectares. Still, although small, it is an important ecosystem, part of the Greek Natura 2000 network of protected areas under the designation Limni Kourna kai Ekvoli Almyrou. Over sixty species of birds are preserved in the region, making Lake Kournas a favorite destination for birdwatchers. Some of these species include the Common Sandpiper, Golden Eagle, Spotted Eagle, Bonelli’s Eagle,  Alpine Swift, Pintail, and Wigeon.

The lake’s fauna was once rich in eels, but it’s better known today for terrapin turtles, watersnakes, and oddly enough, goldfish. The lake’s overall perimeter is about 3.5 kilometers, so hikes around it are not unusual when the weather allows it. Winter hikes are not recommended as the water level rises due to heavy rainfall, and the terrain is not easily accessible in many parts.

There is a serviced beach at the lake, with sun loungers for those who want to relax at its shores. Swimming, however, is prohibited as a measure to protect the fragile ecosystem of the lake. Pedalo boat rentals are available in the hot season. Stand-up paddling is another watersport available at this location.

Several tavernas are serving traditional Cretan fare at the shores of the lake. Although the menu is diverse, village sausages and lamb dishes are the most sought-after by locals dining here.

The Kournas village itself is 200 meters above sea level at the foothills of Mount Dafnomadara. It is a typical mountain settlement, with a community of about 500 people. It has several historical attractions, including the Byzantine church of St. George – one of the most important architectural and religious monuments of its kind on the island. The church dates from the 12th century. Its interiors preserve religious frescoes from the 12th, 13th, and 14th centuries. Take time to observe the views before adventuring further.

Ask the locals for directions to the Kournas pottery workshop to see the Cretan masters at work. Another pastime cherished by many visitors to the village is Mandali Kournas – a multi-national business that offers botanical walks in the area, as well as hikes with donkeys, more exciting for families with children. They have a shop selling local produce like natural wine vinegar, lemon marmalade, carob products, handmade raki glasses, wooden kombolói (worry beads), and bracelets.

Lake Kournas is just 2.5 kilometers from the Blue Flag beach of Georgioupolis – a lovely destination year-round. Reserve a couple of hours to visit Georgioupolis, not only for the beach but also for its beautiful seabound chapel of Agios Nikolaos, one of the most photographed attractions of the region.

Explore a sense of freedom surrounded by nature. A

May the festive season bring you happiness, joy, l

Relax by the pool and embrace the ultimate summer

Enjoy the most amazing dinner with your loved one

Dear guests, friends and family, We are pleased t

Let’s dream about the lazy days of summer ☀️