Set in the lovely Cretan countryside, Arkadi Monastery is a must-see monument of the island with an impressive baroque architecture and an even more impressive history. Located about 23km from the city of Rethymno, it makes an ideal day trip from Fodele Beach and can be combined with a visit to nearby villages and sites, such as Margarites and Eleftherna.

The monastery was probably first constructed in the 12th century, but the exact date is unknown. It took its name after its founder, a monk called Arkadios. The monastery was protected by fortification walls and the residents of nearby villages took refuge here during times of war and unrest. For the same reason, Arkadi became the center of the local revolution against the Ottoman occupation and attracted Cretan rebels who gathered here to organize the resistance. After the heroic battle of 1866, which led to the liberation of the island in 1898, the Monastery became a symbol of revolution and freedom, and a recognized European Freedom Monument by UNESCO.

The story starts on May 1st, 1866, when about 1500 Cretan rebels settled in the Monastery, triggering the reaction of the Ottomans, who demanded from the abbot to expel the revolutionary forces. The abbot refused, and the Ottomans responded with threats to utterly destroy the Monastery. The rebels then started to organize the defense of Arkadi, and hundreds of women and children from the area came to seek protection behind the monastery walls. 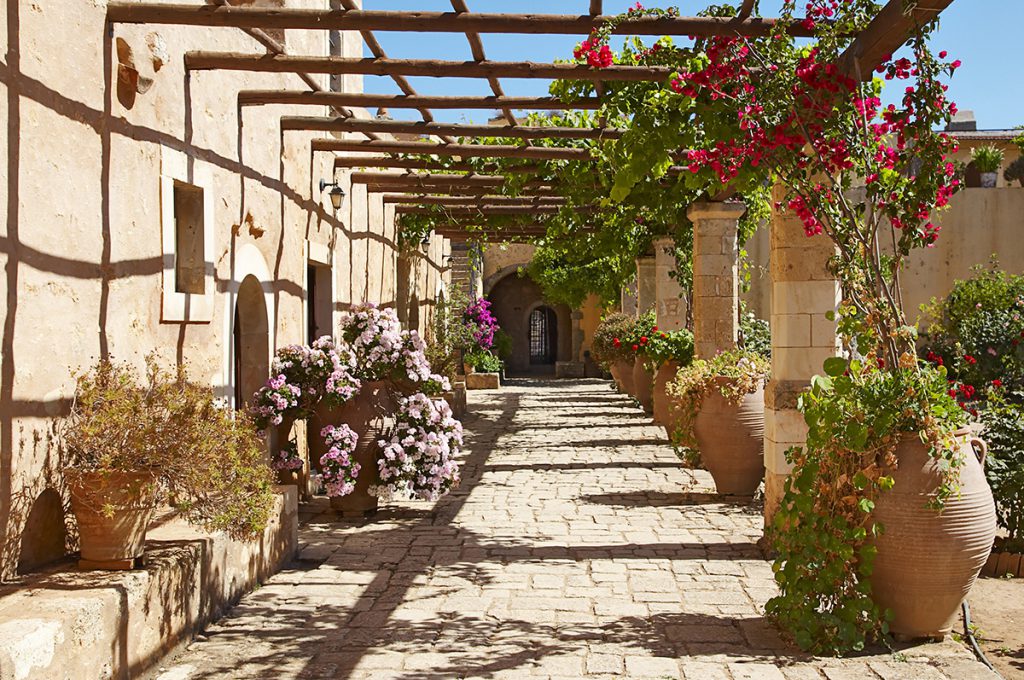 On November 8, an army of about 7000 soldiers, 200 horsemen, and 30 cannons arrived at the gates of the monastery when the Cretans inside were attending Divine Liturgy. When they realized the siege had begun, everyone took up battle positions. At the moment, 966 people were inside the monastery, but only 250 were skilled to fight. The Ottomans asked the rebels for the last time to surrender, but they received another refusal, and the emblem – flag depicting the Transfiguration of Christ (now kept at the Museum of the Monastery) was raised, marking the beginning of the battle.

The Ottoman army was then faced with a fierce resistance and suffered many casualties, despite their advantage in numbers and armor. Even women and children helped in the battle that continued all day long. At night, the Turks brought two heavier cannons from Rethymnon and finally managed to destroy the gate in the morning of November 9. Even after the Ottomans managed to enter the monastery, the battle continued relentlessly, but hope for survival was lost. Women and children, together with the rebels left, retrieved to the storey room, which was filled with powder kegs, and continued fighting until the last moment. In the evening, when it was dark again, Turks broke the door of the storey room. Then, the Cretans waited to attract as many Turks as possible at the door and then shot the powder kegs. The huge explosion destroyed the storey rooms, taking the lives of the remaining Cretans in the monastery and a number of Ottoman lives, and marked Arkadi in history. The aftermath was tragic: 864 dead Cretans, (the rest were taken prisoners and most were executed later) and about 1500 dead Ottomans.

The signs of this epic battle are still visible everywhere in the Monastery. The partly ruined storey room with blackened walls still stands, and today hosts a monument for those who fell in battle. If you notice the old dining tables of the monastery, you will see the marks of the swords, while at the large cypress of the courtyard there are still bullets of that battle.
Don’t miss the Monastery Museum with a variety of interesting exhibits, take your time to explore the beautiful courtyard and spaces of the Monastery, and don’t forget to take a souvenir photo in front of the eerie cypress tree!