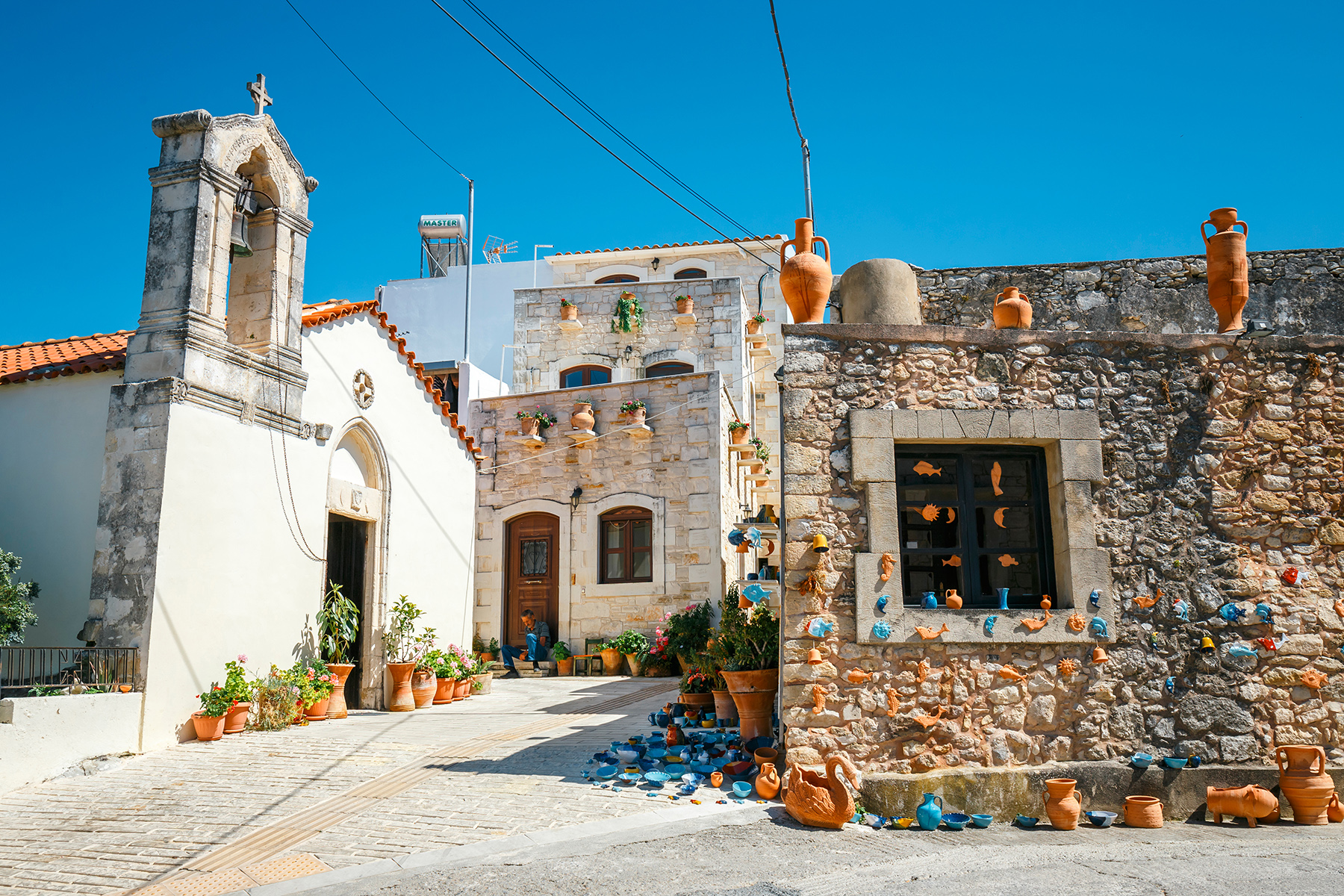 Situated in the foothills beneath Mt. Psiloritis, Margarites is a picturesque village notorious for its pottery tradition. Just 27 kilometers east of Rethymno, this charming traditional hamlet near Ancient Eleftherna is also known for its windy streets and architecture.

One of four main traditional pottery centers of Crete, Margarites has many studios where ages-old craftsmanship has been passed down generation to generation. Here, potters still practice specialized earthenware techniques, some of which date back to Minoan times. Hand thrown pots, even reproductions of the large jars found at the various Minoan palaces are still lovingly and skillfully created at the studios and workshops of Margarites.
Margarites village came to prominence during the Byzantine era. Then, during the Cretan Renaissance, the village became known for magnificent villas, coats of arms, mansions and beautiful churches. Margarites eventually become the headquarters of the Revolutionary Council from 1829 – 1830. This is where the abbot of the legendary Arkadi Monastery, Gavriil Marinakis, the protagonist of the blasting of the monastery, was born.

Potters here still sift the clays and moisten the soil during the gradual and painstaking processes used for many centuries. You’ll find amazing designs with typical Minoan and Greek patterns fired in special kilns designed for creating those distinctive pithoi the Minoans used to store olive oil and grains. The village has more than 16 pottery workshops, each working in a different style, and practicing both modern and traditional ceramic techniques.
Margarites also has a fascinating pottery collection that was set up by the Margarites Cultural Movement in cooperation with the Athens Center for the Study of Contemporary Pottery. Here you will find an exhibition that explains the entire process of pottery-making, models of the ancient stone workshops, and informative exhibits about the types of clays and procedures used.

While you are in the village, be sure to take in the churches of the village, the Renaissance Church of Archangel Michael, and especially Agios Ioannis the Theologian, the oldest of all the churches in the vicinity. There’s also a late Minoan vaulted tomb dating back to about 1350 BC nearby. End your visit in one of the local tavernas sampling authentic Cretan fare before you move onto your next destination.