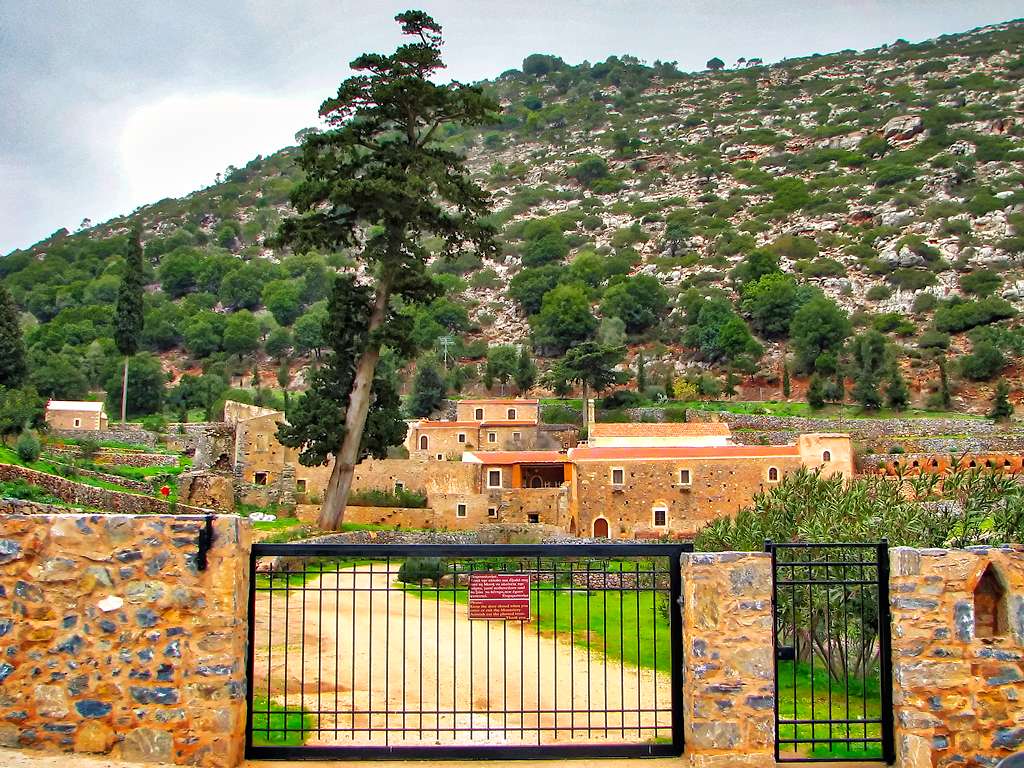 The Vosakou Monastery is one of the most significant religious touristic attractions in the Mylopotamos region of Rethymno and Fodele is a great starting spot to reach it.

Dedicated to the True Cross, the Vosakou Monastery lays on a plateau between Mount Kouloukonas’s peaks Koutsotrouli, Sofiani, and Koufotos. As you drive on the main road from Fodele to Rethymno, look for the signs after you pass Sises. The access to the monastery is to the right, about halfway between Sises and Vlichada. The drive takes you on country roads through a specific Cretan mountainous landscape of unaltered beauty.

A cultural and architectural landmark since 1935, the fortress-style monastery has a checkered past. The first temple ever built where the current monastery rises was traced to 1195, however, it no longer exists. This temple was mentioned in a document in 1629 before the first walls of the monastery were erected around it. For 16 years afterward, the monastery prospered in peace, but in 1646, with the advance of the Ottomans to Heraklion, the fate of the temple took a turn for the worse as it was raided by the Ottoman army, however it was not destroyed.

On August 22, 1669, a month before the Ottoman victory in the Siege of Candia (27 September 1669), three Vosakou monks asked Köprülüzade Fazıl Ahmed Pasha, the Grand Vizier of the Ottoman Empire, to issue a “Holy Order” to protect them. The fact that the monks built a pillar with the embossed cross engraved with the year 1669 means that he granted their wish. The monks also built the fountain of the monastery during the first years of the Ottoman rule as the inscription of the date – 5 August 1673 – reveals.

In the years that followed, the monastery became an important pilgrimage site. It had known peaceful years of prosperity, despite the Ottoman rule over the island. Yet, just at beginning of the Greek War of Independence (21 February 1821 – 12 September 1829), the Vosakou Monastery was burned by the Turks and the buildings, including church, library, and the archives were looted and then destroyed. 18 out of 20 monks were cruerly murdered too. Two survivors of the massacre, abbot Melchizedek, and the hieromonk Anthimos, returned to the monastery and lived among its ruins, restoring what they could, until 1855 when the church you can see today when you visit the site was constructed just where the former used to stand.

The Ottomans managed to destroy the monastery again in 1867, after the battle of Tylissos. Activities continued at the monastery, with monks restoring as much as they could until 1885 when the monastery was fully reconstructed, according to an inscription on the frontispiece of the Church of the Holy Cross. At the time, the monastery counted a population of 12 monks and 17 secularists. However, these numbers declined, and by 1900 the monastery was declared destitute, although it remained in operation. By 1935, local authorities declared the monastery a preservable landmark, yet the decision didn’t attract enough interest from monks to join the monastic life here. Therefore, in 1995, after the death of the last monks, the monastery was deserted and ruined.

Fortunately, local authorities began restorations and renovations in 1998 and they progressed rapidly. The Vosakou Monastery stands again and welcomes pilgrims and tourists alike. More information, in Greek, available on the official website of the Holy Metropolis of Rethymno and Avlopotamos.

Time to recharge in the sun ☀️ #fodele_beach

The profound beauty of Fodele. The sea has been ab