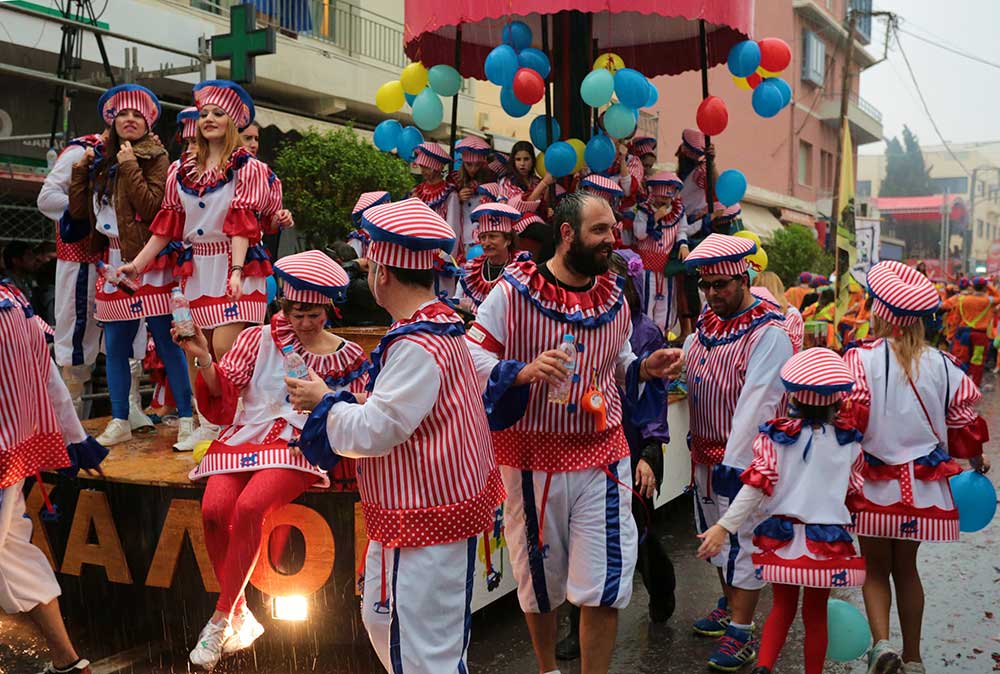 With a history stretching back 107 years, the Rethymno Carnival is Crete’s bacchanal preceding 40 days of solemn fasting, prayer, and repentance during the Greek Orthodox Great Lent called Sarakosti.

The first carnival in Rethymno took place in 1914, and it featured a ball, a parade, games and jokes, and a treasure hunt, which is still one of the favorite events of the celebration today, although it has been discontinued for many years. A group of local organizers revived the Treasure Hunt in 1990, creating “teams” to engage more participants. Since 1993, these “teams” are in charge of organizing and managing the notorious Rethymno carnival.

Today’s typical celebrations include a diversity of events for eleven different days during the span of three weeks. The festivities kick off with the Carnival King’s (???????? ??????????) appearance and continue with children’s parties with music and dance, live concerts, and treasure hunts for all ages. Look forward to seeing the parade of the traditional Cretan cadets, the night parade, and the big parade on the last Sunday of the event – a spectacular procession of the carnival teams with their creative chariots. The big Sunday parade culminates with the burning of the Carnival King’s chariot on the beach.

The Greek carnival – Apokries – is an occasion to revive ancient traditions specific to each of the country’s historical regions. It marks the Triodion period’s start, 22 days before Easter, on the Sunday of the Publican and Pharisee. Triodion ends with the Midnight Office on Easter Eve (Holy Saturday). On the Sunday of the Publican and Pharisee, the “town crier” announces the beginning of the carnival in Rethymno. He will also inform citizens about the program of the festivities. The Town Hall is illuminated during auspicious times, and fireworks light up the night to mark the event. The local authorities canceled public displays of this kind in 2020 and 2021 because of the COVID-19 global pandemic.

The carnival continues with a variety of events in different venues. Some appeal to children, others entertain adults, but all are family-oriented. Each carnival week has a unique “theme,” according to the canons of the Triodion. Thus, the first week is Profoní – ??????? – or the announcement week, the second is Kreatini – ???????? – Meatfare week, and the third is Tyriní – ?????? – Cheesefare week. Kreatini is the last week when Greek Orthodox Christians may consume meat before the Great lent. During the Tyrini week, meat is already out of the menus, and only dairy products are allowed. The last Sunday of the Tyrini week is the Forgiveness Sunday and time for the Great Parade of the carnival in Rethymnon.

Tyrini is similar to the Mardi Gras period in Western Christianity, which lasts from Epiphany (Three Kings Day) until the Shrove Tuesday before Ash Wednesday. Mardi Gras is French for Fat Tuesday, signifying the last day when Western Christians may consume fatty foods before the Lenten season. For the Greek Orthodox Christians, the Great Lent starts on the Clean Monday, which is the Monday following the Forgiveness Sunday.

The Clean Monday – Kathará Deftera -  marks the end of the carnival and the beginning of the Great Lent. Cretans celebrate it by flying kites called chartaetoi and consuming lagana bread, shellfish, and other fasting dishes. The Clean Monday is a public holiday: banks, shops (except bakeries), and public service institutions close their doors, and the locals go out for excursions and family gatherings. Cretans cherish this tradition everywhere on the island. While the carnival is at its most colorful in Rethymno, you will also see parades in Chania, Heraklion, and other towns and villages. This years’ festivities may be on hold, but you can still mark the holiday by observing different customs and traditions. In 2022, the carnival starts on February 13 and lasts until March 6. Hopefully, next year we will witness the flamboyant grandeur of the Rethymno carnival once more.