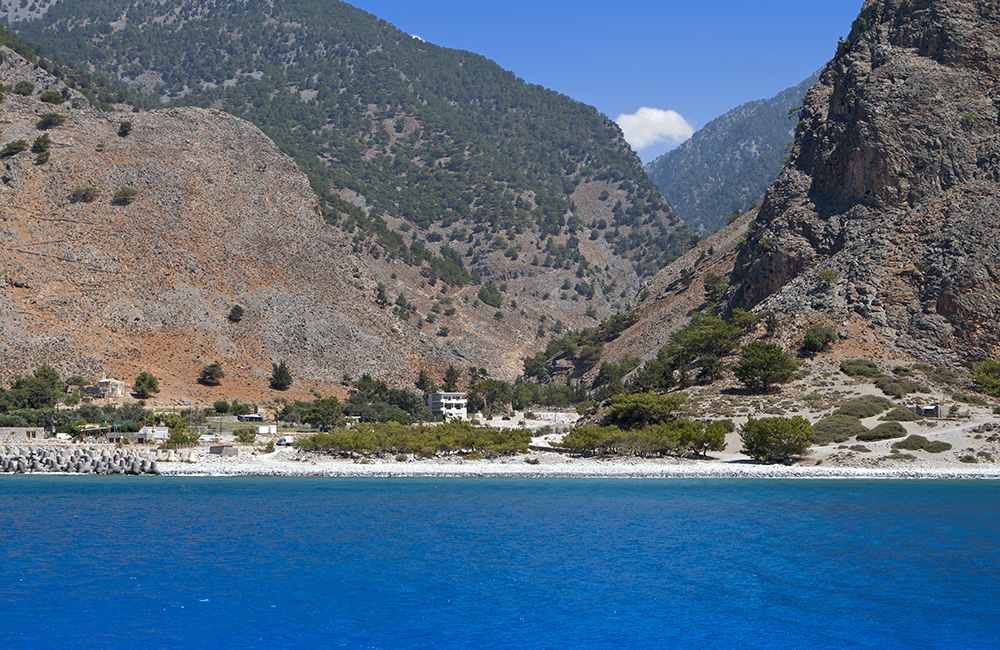 Crete has some of Greece’s most unique wilderness areas to enjoy a year-round destination for nature lovers. A few of the island’s remarkable attractions include the world-famous Samaria Gorge, Psilorites Natural Park, and finally, Sitia Global Geopark. Here’s a brief preview of these “bucket list” nature preserves you must see while on Crete.

The National Reserve of Lefka Ori (Samaria Gorge) is one of Greece’s oldest national parks. Every year thousands of nature lovers and trekkers take the journey of discovery down one of Europe’s most magnificent gorges. This UNESCO Biosphere Reserve attraction is cut into the mysterious and rugged White Mountains of western Crete. The gorge runs 16 kilometers from the trailhead at the end of the road from Chania and 2.5 miles south of Omalos to its endpoint on the Libyan Sea, at the isolated village of Agia Roumeli.

Wear appropriate footwear and carry a few necessities like bottles of water and sunscreen as there are no points of sales or kiosks along the way. The trek is moderately difficult owing to the rocky ground and length of the hike. Be prepared for a ferryboat trip at the end of your journey, since there are no roads to Agia Roumeli. Inexperienced hikers should take a guided excursion since the escorts prepare for just about every circumstance.

The central attraction of the Ida Range, Psiloritis is the highest peak of Crete. According to legend, this is where the Greek god Zeus was born. The area is a wonderland of impressive gorges, secret plateaus, and home to some of Crete’s rarest species of animals and flora. The Ida geopark owns its fame to its stunning beauty and unique geology. Here nature explorers can find Permian fossilized corals, ancient remnants of the Tethys Ocean of pre-history.

High up on the mountain, the sheer diversity of the place becomes apparent, with Minoan Palace ruins situated alongside pristine nature that seems untouched since the dawn of time. On the coast, the beaches of “Panormo,” “Fodele,” and “Mpali” provide added value for not only learning but for leisure and sports activities. The crystal waters of this part of Crete are nothing short of breathtaking. From rock hunting to watching Crete’s majestic birds of prey, visitors to this park get the full breadth of Crete’s offer, cuisine to culture, nature, and science, front to back. Don’t miss a day trip or two into this region.

Another UNESCO Geoparks, this Eden-like destination, shows off the Pleistocene epoch’s fossils and paradise’s development since 2.6 million years ago. Here adventurers get to explore more than 170 caves, countless gorges, and untouched coastal areas reminiscent of prehistoric natural bliss. Sitia lays at the easternmost edge of Crete, where mountains meet the crystal azure seas the Minoans once sailed on the way to Egypt and the near east. The Zakros Mountains dominate the landscape, with the winding shoreline jutting in and out of numerous ravines and gorges. Here you will find Minoan archaeological marvels, ruined Roman and Byzantine towns like Itanos or Zakros Palace, melted into an otherworldly nature-scape unlike anywhere else on Earth. The park is a unique speleological treasure, a paradise for speleologists and other explorers, and a place for wondrous discovery above ground.

What makes Sitia’s geopark so special is the intersection of Asia Minor species with others in an intensely dry climate. In this place, a mosaic of habitats and ecosystems, such as the Palm Forest of Vai Beach, becomes genuinely unique to the overall Mediterranean area. And this says nothing for the sheer beauty of the place. Due to the park’s sheer size and the nature of travel in this mountainous region, travelers should visit over days or even weeks, depending on just how much wonder they intend to take in. Day excursions are possible but expect long drive times in between multiple attractions.

Whenever you decide to visit these beautiful nature parks of Crete, do come out of the winter/rain season, which lasts from November until the end of March – sometimes later. These natural phenomena could endanger your safety, not only due to heavy rainfall but also because of slippery, muddy terrain.