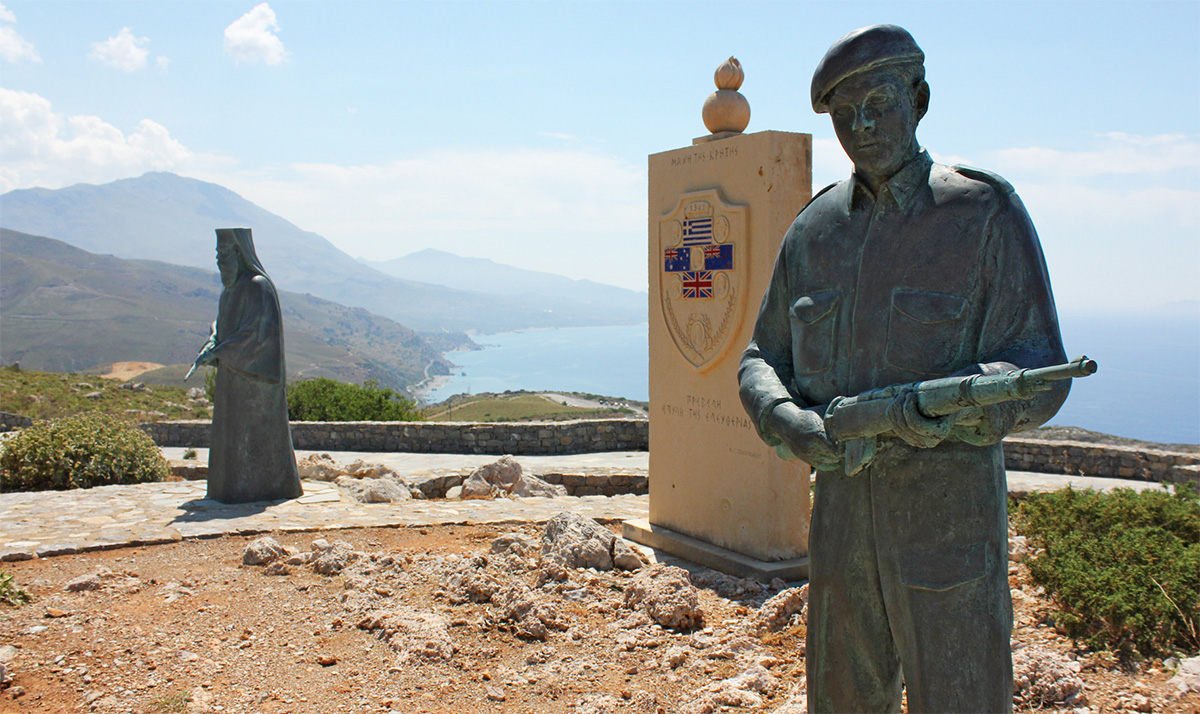 Preveli monastery on Rethymno province’s south coast stands high above the Libyan Sea. For its breathtaking location and the views alone, a visit here on a sunlit day stays long in the memory. But this place has a deep and heroic history.

Like most Cretan monasteries, it was at the centre of anti-Ottoman resistance during Crete’s 250-year long struggle to be free from Turkish rule. Burned by the Turks in 1866, this is a place that has seen great heroism and has been witness to remarkable events.

It was here in 1941 that one of the greatest escape stories of the Battle of Crete took place. In July and August of that fateful year, just weeks after the Germans had invaded Crete, that hundreds of Australian, British and New Zealand soldiers who had evaded capture after the island’s fall were spirited away by submarine under the noses of their Nazi pursuers.

About a thousand Allied troops had stayed in hiding on Crete after the official surrender on 1 June 1941, most escaping first into the White Mountains, where local people gave them food and shelter. In the weeks that followed, desperate to find a way to leave the island, small groups, helped by Cretan resistance fighters, made their way eastwards, and had contact with Allied special agents sent to Crete to organise their evacuation.

At Preveli, in great secrecy, the monastery’s abbott, Agathangelos Lagouvardos, provided a safe refuge for hundreds of the stragglers hiding in the surrounding area, and by late July, arrangements were being made for an audacious night-time evacuation from the monastery’s beach.

Just after midnight on the 28th July, the British submarine HMS Thrasher,  began embarking 78 escapers, all of whom arrived safely in Alexandria, Egypt, three days later

The submarine’s commander, Francis Pool, remained on Crete to arrange a second evacuation – of 130 stragglers – by submarine from the same beach, which took place on 25 August.  More than 200 Allied soldiers had managed to escape Crete and live to fight another day, due to the courage of Preveli’s monks and the ingenuity of the British navy.

Five days later, the Germans took their revenge. Tipped off about the evacuations, the Germans plundered the monastery, and a lower section of the monastery on the beach was destroyed. Abbott Lagouvardos managed to escape but many monks were imprisoned. With Preveli out of action in the months that followed, the Allies would use isolated beaches in the far west and in Heraklion province to pull out the remaining stragglers.

Today the monastery is open to the public but is still a working monastery. Its museum comprises 17th-19th century icons and relics. As an active monastery women are requested to cover their shoulders and legs. Shawls are provided.

As Greece continues to navigate the COVID-19 pandemic and with precautionary measures possibly in force, people wishing to visit museums and similar locations are advised to contact the organisation directly to confirm accessibility.