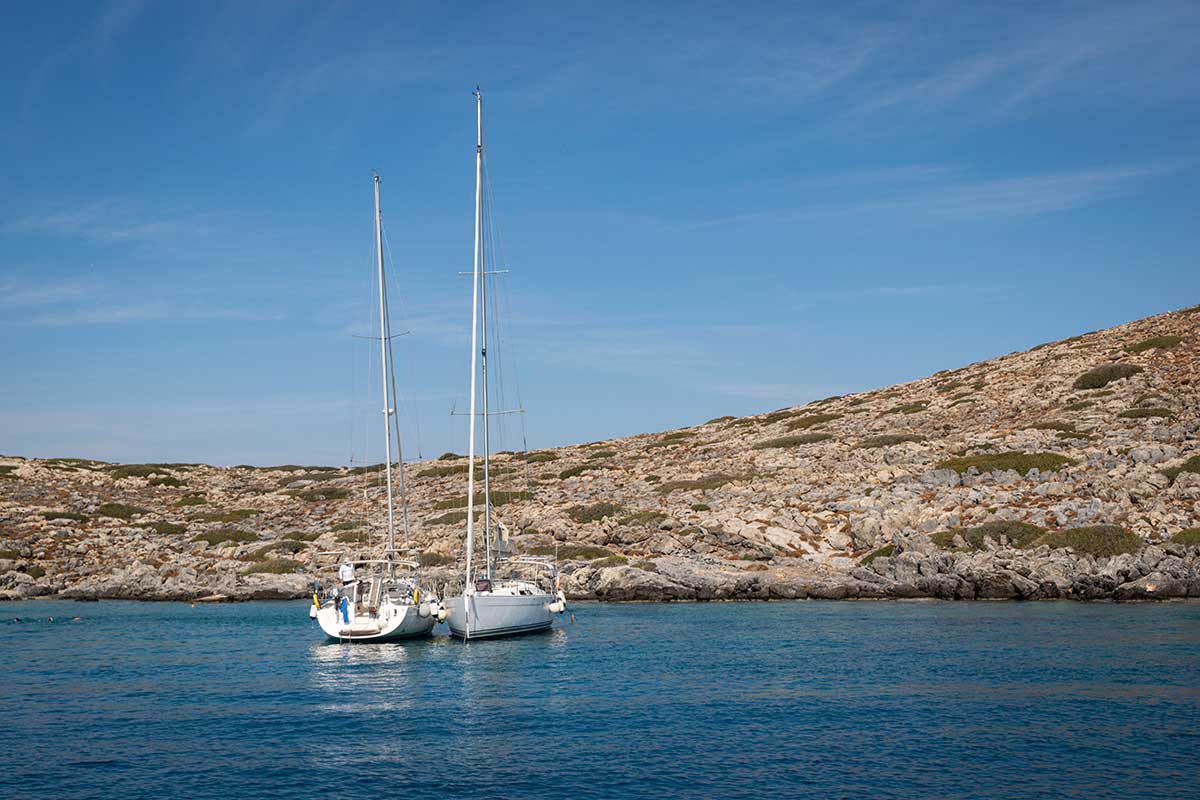 Although in Minoan times and Antiquity, Dia Island was the main port of Crete, today, the island no longer serves its navigational purposes. Instead, it is a protected nature reserve, part of the Natura 2000 ecological network.

Wild rabbits from the genus Oryctolagus cuniculus cnossius run free all over the island. You will also see the kri-kri (Capra hircus cretica – or the Cretan Ibex) grazing on the rocky cliffs.

But you may not go hiking because Dia is an N2000-protected nature reserve. Mandatory regulations will limit your access to a secluded beach or a walk to the Chapel of Analipsis from the port of Agios Georgios – the only port of Dia.

Zeus, the mighty king of the Olympian gods, was born on Crete. The wild goat Amalthea nursed him in the Diktaion Antron cave. Her children were the kri-kris.

When Zeus saw the Cretans hunting the kri-kris with bows and spears, he decided to decimate all of them. So, he threw a lightning bolt into the sea. A horrible monster emerged, ready to eat every human that moved on the island. But Poseidon, the god of the sea, pleaded for their lives:

“My Father and King, how can you devastate Kourites? Is that the way to repay the good that they have made to you?“

The Kourites were Cretans who banged their shields loudly to mask Zeus’s cries from his father Cronus, who wanted to eat him.

Moved by Poseidon’s words, Zeus changed his mind and threw two pieces of rusk into the sea to attract the monster. When the monster tried to eat them, Zeus petrified him with a thunderbolt, turning him into Dia. The two islets, Paximadi and Petalidi, next to Dia, are the rusks that tempted the monster.

Another legend tells that after killing the Minotaur, Theseus and Ariadne found shelter on Dia.

Why a Day Trip to Dia Island?

Since you may not hike on the island, you wonder why you need a day trip. The drive from Fodele Beach & Water Park Holiday Resort to the Old Venetian harbour in Heraklion will take over thirty minutes. From there, the boat trip lasts more than an hour.

When you reach the island, you can go fishing, swimming, snorkelling, sunbathing, or relaxing in the shade of cypress trees in a secluded bay. You can also see the Panagia Cave and the little church in the Agios Georgios port and take a short stroll on a marked path among cypress trees. Some tours will include a traditional Cretan lunch. All these activities depend on the tour operator – and there are several – take time, and despite being easy, they will drain you of energy.

Bring your own sunscreen and towels, as these are not included in most boat tours. However, you will have beverages and snacks.

When Jacques Yves Cousteau searched for the Lost Atlantis in the mid-1970s, he discovered seven shipwrecks and rectangular breakwater rocks in the seabed researchers named the Cyclopean Walls. According to Cousteau, they were proof that Dia was once one of Crete’s largest, most important ports.

So, snorkelling will reward you with mesmerizing views of the rich sea bottom, and besides fish, you will see ancient pottery and shipwrecks.

For scuba divers, the recommended diving sites are Petalidi on the North-West side and Paksimadi on the East side of Dia. Divers will see mesmerizing reefs with groupers, large pelagic fish, octopuses, sponges, shells, colourful nudibranchs, and even pharaoh cuttlefish. If you are lucky, you can spot dolphins and Caretta caretta turtles in the waters.

The boat trips to Dia island are usually not recommended for children under four years old and pregnant women. They are primarily family-friendly, but you can also find romantic adults-only tours. You can find many tour boats in the Old Venetian harbour of Heraklion. But you must book in advance because day trips to Dia Island rank among the top activities for visitors on Crete Island.