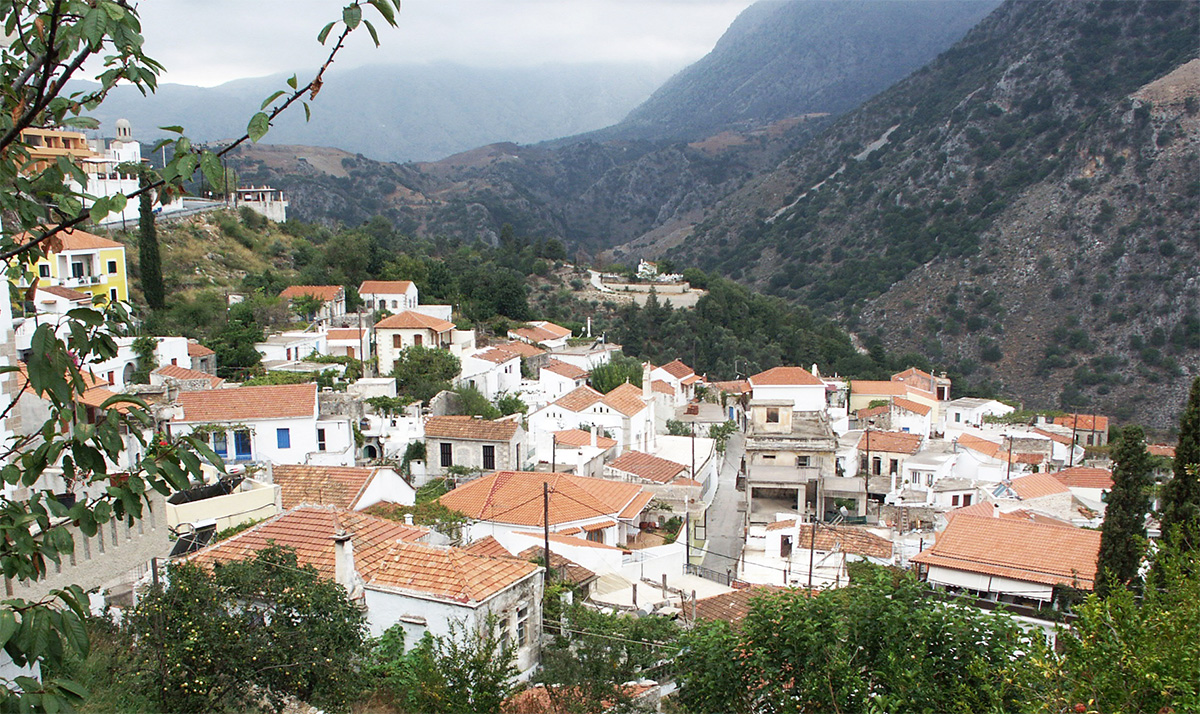 The mountains of Crete are the island’s heart, and the communities of the Cretan highlands are societies almost to themselves, bastions of a traditional way of life that has remained almost the same for centuries.

Every village is steeped in history, with most having witnessed hardship and conflict, some more obviously than others. Located in a steep gorge at an altitude of 600 metres Asi Gonia lies on the eastern edge of the White Mountains, equidistant from the north and south coasts.

The journey from Rethymno to Asi Gonia through Argiroupoli takes 40 minutes by car. And it’s a trip that not only reveals a typical traditional mountain village, but an essential part of Crete’s history and identity.

The name itself says much about this place. ‘Asi Gonia’ roughly translates (from the Turkish) as ‘rebels corner’, and during more than two centuries of Ottoman rule of Crete, it’s believed no Turk ever set foot in these parts, such was the ferocity of the local people, aided by the natural fortress that is the Asi Gonia landscape.

The village’s reputation as a centre of heroic  resistance against foreign invasion continued into the 20th century, when German forces occupied the island in World War II.  After the Battle of Crete, the actions of one young Asi Gonian, George Psychoundakis acting as a runner for the Cretan resistance during the occupation became the stuff of legend. Psychoundakis’s exploits, assisting British secret agents such as Patrick Leigh Fermor, he later chronicled in a book – The Cretan Runner – one of the most remarkable accounts ever written of WWII resistance activity in Crete.

Asi Gonians today eke out a living in this highland hamlet much as their ancestors have done for centuries. This is a village of shepherds and cheesemakers, and sheep, and the providers of the villagers’ livelihoods are given special status.

In the spring, on the feast day of Saint George, April 23, the small church of Agios George Giorgos near the main square becomes the focus of a spectacular and ancient tradition.From grazing pastures across the region, from early morning, thousands of sheep and goats are brought by their shepherds to be blessed by the village priest. Once blessed, the sound of sheep bells resonating through the village, the flocks are then milked and the warm milk shared amongst the onlooking crowd.

Needless to say, Asi Gonia’s locally made cheeses are the real deal. Pick up some pichtogalo (sheep’s cream cheese) or graviera in the local shops and you won’t buy fresher.

Asi Gonia’s tavernas serve the staples of Cretan traditional cuisine in big portions. Two of the most popular are:

Sit inside or if the weather allows at the large shaded terrace, for grilled lamb (antikristo) and other meaty delights. Tel. 697 872 9855

For intrepid types, the mountain road south, to Kallikratis and Asfendos is one of Crete’s wildest. You’ll end up at the Askifou plain after a hair-raising drive with jaw-dropping views and stomach turning hairpin bends. For a gentler return to Rethymno or Chania, at Askifou head north to Vrysses and the national road.